Spiral Arterial Morphology in Relation to Hypertension in Pregnancy and Birth Weight by Placental Bed Biopsy: A Retrospective Analysis

Copyright: © 2020 Nobis PN, et al. This is an open-access article distributed under the terms of the Creative Commons Attribution License, which permits unrestricted use, distribution, and reproduction in any medium, provided the original author and source are credited.

Background: Physiological changes in spiral arteries i.e. remodeling occur upto myometrial segment of the vessels and these changes are important for growth of the fetus. However in hypertensive pregnancies and IUGR, these changes are often not seen and arteries remain non-dilated. The aims of the study were to assess the extent of spiral vessel dilatation in hypertensive pregnancies and IUGR cases.

Methods: Placental bed biopsy were taken in cases who underwent caesarean section and gave consent for the study, during the study period. 50 cases were included. Morphology and diameters of spiral arteries were assessed by histopathological examination. Arteries who retained the non-pregnant morphology were considered non-dilated and those who showed features of remodeling were considered normal. 14 cases were excluded as no vessel was seen in biopsy specimen. T-test and Chi-square tests were used for analysis. Out of the included 36 cases, percentage of non-dilated vessels was significantly high in gestational hypertension and preeclampsia(p=0.0230) and also significantly high in IUGR cases, (p=0.0113),irrespective of hypertension. Also the percentage of non-dilated vessels was higher in nulliparous women, though not significant. Placental bed biopsy specimens have limitations because they only provide information about a small segment of the placental bed. It is possible that areas close to the nonbiopsy site may have a completely different degree of vascular transformation. Moreover the number of cases in this study is less.

The term ‘placental bed’ was introduced by Dixon and Robertson around 60 years back and can be described as that part of decidua and adjoining myometrium which underlies the placenta and whose primary function is the maintenance of adequate blood supply to the intervillous space of the placenta [1].

The spiral arteries of placental bed are invaded by the cytotrophoblasts which breaks down the endothelium, internal elastic lamina and the muscular coat of the vessel, which are largely replaced by fibrinoid. These physiological changes convert the vessels supplying the placenta from muscular end arteries to wide mouthed sinusoids, leading to around 5-10 fold dilatation of the vessel. These physiological changes lead to reduced vascular resistance and a considerable increase in blood supply to the fetus.

In preeclampsia & IUGR, physiological changes are almost completely restricted to the decidual segment of the spiral arteries. Spiral arteries in the myometrial segment appears to have normal morphological structure as seen in normal non pregnant uterus, including the retention of internal elastic lamina. The mean external diameter is approx 200 μ. Lesions of thrombosis, acute atherosis with intramural foam cells occasionally occurs [3]. Many studies have described some characteristic features of vessels in placental bed in hypertensive pregnancies- i.e. hyalinization of true arterioles and intimal hyperplasia with medial degeneration and proliferative fibrosis of small arteries [4,5].

Absence of remodeling of spiral arteries has also been reported in IUGR cases, even in absence of hypertension [6].

Disorders of deep placentation are characterized by:

2) The presence of arterial lesions in the junctional zone myometrium of the placental bed [7]. This defective deep placentation is associated with a spectrum called The Great Obstetrical Syndromes that includes preeclampsia, IUGR, preterm labor with intact membranes, preterm PROM, abruptio placentae and spontaneous midtrimester abortion.

Also Vascular lesions do not occur in every spiral artery and they can be focal or segmental and therefore may be absent in random sections and biopsies [9].

Histological confirmation that the biopsy has been derived from the placental bed is based on the presence of trophoblast, adherent villi or transformed spiral arteries. However, the absence of these markers does not necessarily mean that the placental bed was not sampled [10,11].

• To assess the extent of dilatation of spiral arteries in placental bed in relation to birthweight.

The data was collected from a hospital based cross-sectional survey of histological studies on biopsies from the placental bed, among women undergoing cesarean sections for various obstetrical reasons at Gauhati Medical College & Apollo hospitals, Guwahati in over a period of 2 years, a few years back. Singleton, live pregnancies who have crossed the period of viability were included. Now we have a retrospective analysis of the data collected in that period. Clearance from Ethical Committee has been taken clearly.

Women who were planned for an elective or emergency caesarean section during the study period were told that biopsy will be taken from placental bed for a study. Details of the procedure were discussed with the patient & husband. Those who gave written and informed consent were included in the study. Thus in 50 cases biopsy could be taken.

Materials were collected over a period of 2 years in the tertiary centres as mentioned above. After expulsion of placenta, biopsy material were taken by wedge resection of 1.5 × 1.5 cm tissue from the placental bed. Biopsy specimens were collected by direct visualization of the centre of the placental attachment site and taken from 2 randomly chosen placental sites. If bleeding occurred, hemostatic stitches were given.

Biopsy specimens were sent to the pathologist for histopathological examination in 10% formaldehyde. Sections of tissue were stained with hematoxylin-eosin stain.

The diameter of the arterial lumen was measured with the help of an ocular and objective micrometre. At first the slide was focused under objective (10X) and viewed with a 10X eyepiece. One vision of the ocular micrometre scale is equivalent to 13.6 μ at 100 times magnification. The arteries seen in the field were measured by placing the ocular scale over the arterial lumen and counting the number of small divisions occupied by the lumen. This number was multiplied by 13.6 to get the diameter in μ. The measurement of external diameter was taken at 3 or 4 different directions and its average has been taken. 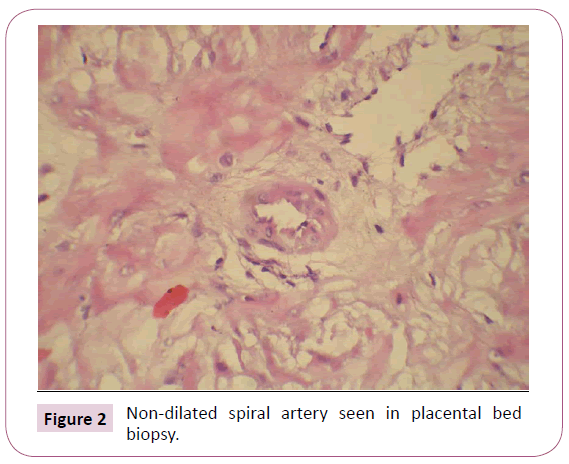 Out of 50 cases, 14 placental beds showed no vessels at all. Thus these cases were excluded from further studies. 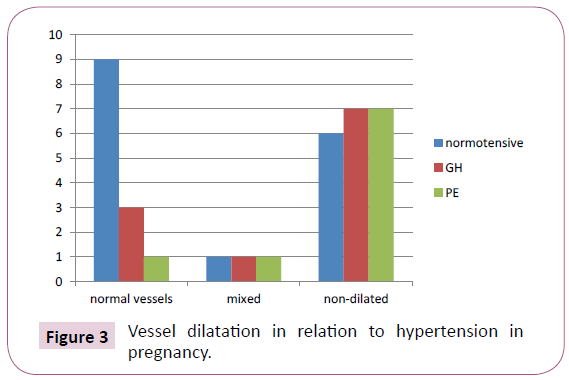 Figure 3: Vessel dilatation in relation to hypertension in pregnancy.

Table 1 Spiral vessel dilatation in relation to hypertension in pregnancy. 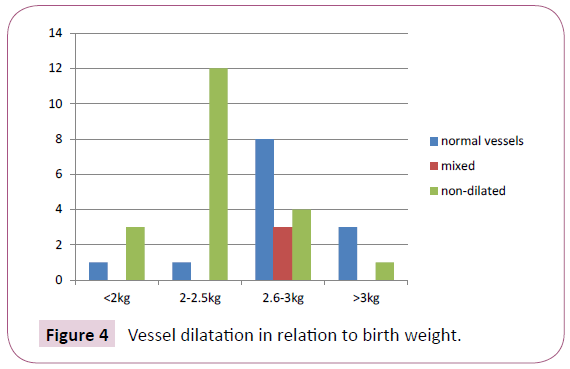 Table 3 Relation of birthweight to hypertension in pregnancy in this study. 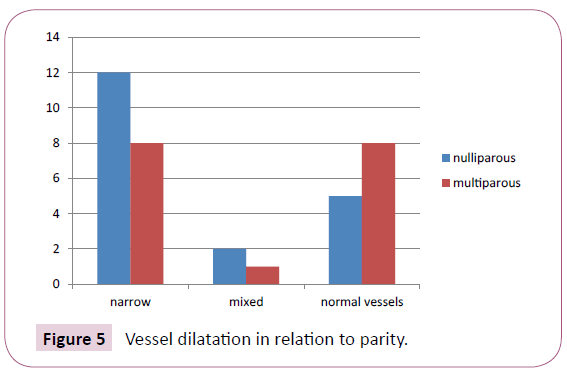 In many studies of placental bed biopsies, some specimens had no vessels. This percentage range from 40-70%. [12,13]. In our study, in 28% cases, no vessels were seen in the biopsy specimens.

Studies have shown that defective deep placentation can occur in growth restriction even in normotensive women [17,18]. In the present study also we found a significant co-relation between low birth weights and non-dilated spiral vessels. (p= 0.0113), which is independent of the effects of hypertension. Out of the IUGR cases in our study (with or without hypertension), 88% had nondilated vessels.

Though there are just 4 cases of preterm labour/premature rupture of membranes, out of these 3 have non-dilated vessels. Thus defective deep placentation may have a role in preterm labour, as highlighted by Kim et al. [19].

In this study, higher percentage of primigravida cases had nondilated vessels. This point has been highlighted in the chapter 2 of book Placental bed disorders [20]. Such results may indicate a process of pre-conditioning and inflammation in pregnancy, which is more important in primigravidas. Interestingly percentage of nulliparous women is higher in preeclampsia and preterm labor group. Thus defective deep placentation in this group may be related to other factors also.

Limitations of the study- Although the distribution of interstitial trophoblast in the junctional zone myometrium is not homogeneous (and varies not only between patients, but also between biopsy specimens from the same patient), placental bed biopsy specimens have limitations because they only provide information about a small segment of the placental bed. It is possible that areas close to the nonbiopsy site may have a completely different degree of vascular transformation [10]. Moreover the number of cases in this study is quite less.

Gestational hypertension, preeclampsia, IUGR, preterm labour are associated with defective deep placentation, which may be associated with different degrees of restricted remodeling and obstructive lesions of the spiral arteries in the junctional zone or inner myometrium. All the conditions included in ‘Great Obstetrics Syndrome’ are likely to share same pattern of defective deep placentation. This concept may be used to improve the characterization of the disorders of the placental bed.

Understanding the molecular processes that occur during implantation and the process of endometrial decidualization and angiogenesis is a target for pre-pregnancy diagnosis and therapy. Characterization of angiogenesis and the development of biomarkers in early placental development are likely to provide diagnostic and hopefully noninvasive predictive markers to identify mothers at risk for defective deep placentation syndromes such as preeclampsia, IUGR, preterm birth and other adverse pregnancy outcomes.