Mineralization of Bones in Osteoporosis and Osteomalacia

All vital process in human life as walking, jumping, working, and enjoy with good life apply healthy bone. The normal bone formation required significant amount of some minerals as calcium and phosphorous, also vitamin D which play important role in movement of calcium in to bone which responsible for bone healthy. There are different causes include life style, genetics, hormonal, and insufficient amount take from calcium and vitamin D which responsible for defect in bone formation process, and appear abnormal bone structure. The most bone diseases are osteoporosis, and osteomalacia in this work we discuss the definition, causes sign, diagnosis, pathophysiology, and treatment of both osteoporosis, and osteomalacia.

This interaction between protein and minerals donate the bone both flexible and strong. Main concentration of calcium present in bones and teeth.

During lifetime, old bone is removed and new bone is formed. Rate of bone formation is faster than the rates of bone remove during childhood. So, bones become more large, heavy, and dense. In women, rate of bone removed increase after post menopause. Bones need calcium and phosphorus to remain healthy and strong, but the body also needs vitamin D to be able to absorb these two minerals. Without this necessary vitamin, bones can become soft and flexible. The most common bone illnesses between populations are osteoporosis and osteomalacia. Osteoporosis is more well-known than osteomalacia [2].

Definition of osteoporosis: Osteoporosis is a bone disease which characterized by low bone mass as result of body loses too much bone and makes too little bone. This leads to increased bone fragility so increased susceptibility to fracture, especially in the hip, spine, wrist and shoulder. Osteoporosis means “porous bone.” Healthy bone looks like a honeycomb. Once osteoporosis happens, the holes and spaces in the honeycomb are much larger than in healthy bone. Though bones in osteoporosis have lost density, weaken and are more expected to break (Figure 2) [3].

Figure 2: Bones shape in osteoporosis as compare to healthy case.

Epidemiology of osteoporosis: Osteoporosis is more common than heart attack, stroke and breast cancer combined as shown in Figure 3.

Sign and symptoms of osteoporosis: Osteoporosis is often recognized as “the silent thief” for the reason that bone loss happens without symptoms. Osteoporosis can be present without any symptoms until bone breaks. The symptom associated with osteoporotic fractures usually is pain; the position of the pain depends on the location of the fracture [5].

Causes of osteoporosis: Bones are in a constant state of regeneration where new bone is made, and old bone is broken down. During childhood, body makes new bone faster than it breaks down old bone, so bone mass increases. In old people, bone mass is lost faster than it's formed. The chief cause of osteoporosis is a deficiency of certain hormones, as androgen in men and estrogen in women. Menopause is a foremost factor that cause lower estrogen levels and increase women’s risk for osteoporosis. Risk factors for osteoporosis include genetics trouble, absence of exercise, deficiency of calcium and vitamin D, malabsorption, high-dose oral corticosteroids, low body mass, smoking, alcohol intake, rheumatoid arthritis, and family history of osteoporosis [6].

Pathogenesis of osteoporosis: Osteoporosis result due to imbalance between bone resorption and bone formation. This process takes place in bone multicellular units. Osteoclasts are aided by transcription factor PU.1 to destroy the bone matrix, while osteoblasts reconstruct the bone matrix. Low bone mass density occurs if osteoclasts are degrading the bone matrix faster than the osteoblasts are rebuilding the bone. There are three main mechanisms by which osteoporosis develops; an insufficient peak bone mass, excessive bone resorption, and insufficient formation of new bone. Hormonal factors strongly control on the rate of bone resorption; lack of estrogen increases bone resorption, also decreasing the deposition of new bone [8]. In addition to calcium metabolism plays a significant role in bone turnover, and deficiency of calcium and vitamin D leads to diminished bone deposition; moreover, the parathyroid glands react to low calcium levels by secreting parathyroid hormone, which increases bone resorption to safeguard enough calcium in the blood. Calcitonin, a hormone produced by the thyroid that increases bone deposition, is less effective as compared to PTH [9].

• Estrogen antagonists which act as inhibitor for spine fractures.

• Calcitonin which responsible for prevention spinal fracture in postmenopausal women.

As well as, prevention of osteoporosis is most important than treatment. Osteoporosis can be prevented by:

• Take medications which increase bone formation such as teriparatide [11].

Definition of osteomalacia: It is the softening of the bones due to impaired bone metabolism as result of insufficient levels of phosphate, calcium, and vitamin D, or because of resorption of calcium. All of this leads to inadequate bone mineralization. Osteomalacia in children is known as rickets (Figure 4) [12]. 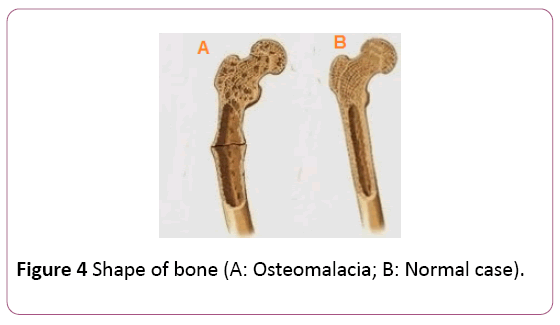 Figure 4: Shape of bone (A: Osteomalacia; B: Normal case).

Epidemiology of osteomalacia: Osteomalacia is rare in the United States and Western Europe. In attendance is a developing in occurrence of vitamin D deficiency in various countries, which responsible for suffer from hypocalcaemia, secondary hyperparathyroidism, secondary hypophosphatemia, and osteomalacia. People at risk include:

• The people who have slight exposure to the sun and take inadequate amount from dietary calcium and vitamin D.

• Patients with malabsorption as in gastrointestinal bypass surgery, or celiac disease.

• Take anticonvulsant therapy include phenytoin and phenobarbital for long time [13].

The foremost symptom of osteomalacia is pain in bones, especially in lower back, hips, and legs at night. Muscle cramps, numbness and tingling in legs may be occurring in osteomalacia due to deficiency of vitamin D and calcium. Waddling of gait due to weakness in the legs and lack of proper muscle tone is addition to frequency of fracture [15].

Causes of osteomalacia: Osteomalacia happens from a defect in bone modulation process. In metabolic process the body required some minerals as calcium and phosphate in synthesis process of bones. So develop osteomalacia occur as result of deficiency of these minerals. These problems may be caused by as follows [16]:

• Vitamin D Deficiency: Vitamin D deficiency is the furthermost common cause of osteomalacia. People who live far from exposure to sunlight or take inadequate amount of vitamin D can develop osteomalacia [13].

• Celiac disease. It is autoimmune disease which responsible for malabsorption of calcium and vitamin D [17].

• Kidney or liver disorders: Any problems kidneys or liver can inhibit the ability of body to synthesis active vitamin D.

• Drugs: Some drugs as phenobarbital can cause severe vitamin D deficiency.

• Bone X-rays and a bone density test can help detect bone softening so, help in diagnosis of osteomalacia. 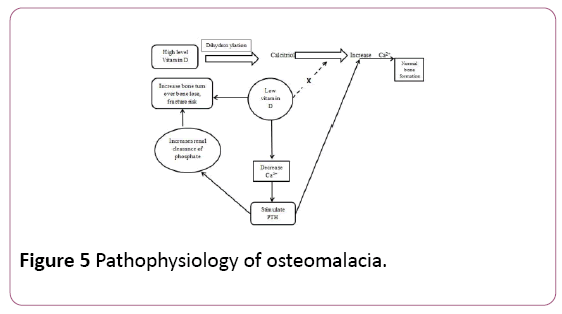 Differentiation between osteoporosis and osteomalacia

Table 1: Differences between osteoporosis and osteomalacia.

Although calcium and vitamin D play important role in bone synthesis, although Mg has important bio vital effect on maintaining skeletal health. Alternative warm area of research relates to the use of mesenchymal stem cells (MSC) for regenerative medicine in treatment of bone diseases including osteoporosis, and osteomalacia [22].

Osteoporosis is reduction of mass of the bones. On the other hand osteomalacia is the softening of the bones. Osteoporosis can be cause due to deficiency of vitamin D, while osteomalacia is caused by a deficiency in calcium and phosphorus. Treatment of these diseases can be significant by using calcium, vitamin D with high does naturally or in the form of supplements.

The authors declare that they have no conflict of interest.