Management of Subacute Thyroiditis with Conventional High-Dose Prednisolone; Shooting a Tree Sparrow with a Cannonball

Background: A well-established medical entity, and typically self-limited disorder, the subacute thyroiditis (SAT), has been conventionally treated with a large dose (40-80 mg) of prednisolone per day for decades: a nonevidence- based and utterly large dose of corticosteroid for a disease with clearly predictable self-limiting course. The current study was designed to evaluate the efficacy of prednisolone 15 mg/day instead of routinely prescribed large dose of 40-80 mg, and to investigate the rate of early relapse with low-dose protocol.

Subjects and methods: In a prospective study, forty-five cases of SAT were consecutively included. The diagnosis of SAT was made based on defined criteria of persistent sore throat, rapidly developed painful goiter, suppressed TSH, high ESR, and low RAIU. They were treated with 15 mg of prednisolone per day during the first month, 10 mg per day for the second month, and finally 5 mg daily over the third month. All cases were carefully followed for a minimum of one year to track the clinical and biochemical response to therapy and to find out any evidence of early relapse after discontinuation of medication.

Results: Of forty-five patients who completed the oneyear- course of follow-up, 38 were female and 7 were male (male/female ratio 5.4). Mean age of affected subjects was 39 ± 10 years, and mean ESR was 70 ± 23 mm/hr (median 75 mm/hr, range 30-117 mm/hr). Among all subjects with full-blown SAT, only one case (2.2%) remained noticeably symptomatic on 15 mg prednisolone daily after two weeks, requiring 30 mg of medicine per day for symptomatic relief and normalization of ESR. After corticosteroid withdrawal, significant relapse occurred in only two patients (4.4%).

Conclusion: Our results, not only endorse the efficacy of low-dose prednisolone in management of subacute thyroiditis, but also demonstrate the remarkably less relapse with low dose corticosteroid.

Subacute thyroiditis, also referred to as viral, granulomatous or de Quervain’s thyroiditis is a self-limiting inflammatory process of thyroid gland causing considerable morbidity for weeks or even months while left untreated. Writing about SAT necessitates paying tribute to some of distinguished pioneers in this field, namely, Mygind, de Quervain and volpe, who first reported, pathologically defined and eventually presented the various clinical and laboratory aspects of SAT [1-4]. Mimicking one of the most common diseases of human-sore throat-, the diagnosis of SAT is frequently over looked or delayed for weeks or sometimes months. Rapidly developing goiter, which is exquisitely tender on palpation, is the major clinical presentation leading the physician towards the correct diagnosis. In addition to abnormal thyroid function tests (increased serum Free T4 with reciprocal suppression of TSH over the first few weeks), significant elevation of erythrocyte sedimentation rate (ESR) and CRP are the most common laboratory finding in SAT [5]. With respect to presumptive triggering factors, the upper respiratory tract viral infections have been mostly stressed. Due to dramatic response to corticosteroids, SAT has been treated with lavish doses of prednisolone for decades. Considering the unquestionably self-limiting nature of SAT, high-dose, long-course corticosteroid therapy sounds clearly unreasonable. Currently, the usual starting dose, proposed by almost all medical text books, is 1 mg/kg of prednisolone per day; a vaguely suggested dose which has never been documented through a finely designed study [6,7]. In addition to investigation of the demographic characteristics, clinical pictures and laboratory findings of SAT, our study was aimed at determination of the therapeutic response and early relapse with low-dose prednisolone regimen.

In a prospective observational study conducted in a university hospital endocrine clinic from 2010-2016, forty-five patients who fulfilled the defined criteria of persistent sore throat, unequivocal tender goiter, abnormal thyroid function tests, elevated ESR and low radio-active iodine up-take (RAIU), were consecutively enrolled. The patients were initially given prednisolone 15 mg per day (10 mg in the morning and 5 mg in the afternoon) during the first month, tapered to 10 mg once a day over the next month. Over the third month, only 5 mg/day was prescribed and then, the medication was discontinued. Subjects were clinically and biochemically (TFTs and ESR) evaluated monthly for the first three months, and were informed about symptoms and signs of early relapse and were asked to attend the clinic for follow up visits, at least, every two months up to the end of the year. Data were collected and descriptive features of different variables were assessed. Results were reported as mean ± SD for the quantitative variables and percentages for the categorical parameters.

Forty-five patients completed the defined one-year followup visits. 38 were female and 7 were male with female to male ratio of 5.4. The average age of participants was 39 ± 10 years (median 37 years, range 25-75 years). The interval between the onset of symptoms and established diagnosis of SAT was 5 ± 1 weeks, indicating the unacceptably low suspicion index towards considering the possibility of SAT in the differential diagnosis of persistent sore throat; a matter that was first addressed by late Volpe almost sixty years ago in an article entitled “subacute thyroiditis; a disease commonly mistaken for pharyngitis " [8-11]. Mean ESR was 70 ± 23 mm/hour (median 75, range 30-117 mm/hr) at the time of SAT diagnosis. As a matter of fact, remarkable increase in ESR was the most persistent biochemical feature of full-blown SAT (Table 1).

In contrast to rather persistent increase in ESR, white blood cell count of more than 10000/ml was seen in only seven patients (16%), most likely, due to delayed diagnosis or overthe- counter NSAID intake. Out of forty-five SAT cases in our group, forty-four cases achieved rapid response to previously mentioned therapeutic protocol, and only one subject (2.2%) remained notably symptomatic after two weeks, making us to escalate the dose of prednisolone to 30 mg/day for further symptomatic relief and normalization of ESR (Figure 1). After glucocorticoid withdrawal, early relapse, occurred in two patients (4.4%) who were in need of another 4-6 weeks of prednisolone 5-10 mg daily (Figure 2). At the end of first year, two patients (4.4%] remained overtly hypothyroid requiring thyroid hormone replacement therapy probably life-long. Next to sore throat and tender goiter, weight loss was a significant clinical finding of SAT. Mean weight loss was 6.5 ± 3.9 kg (median 5 kg, range 3-15 kg). 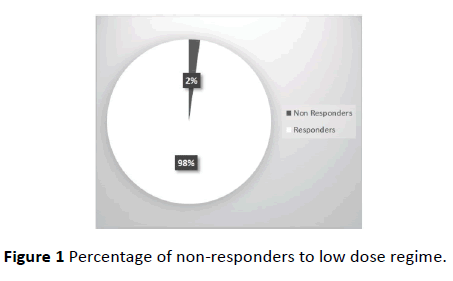 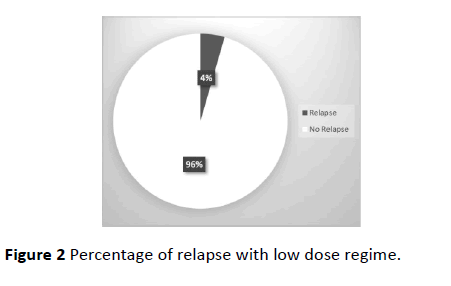 In terms of demographics and major clinical and laboratory findings, our results from Iran were, more or less, consistent with most of previously carried out studies relevant to SAT [1-5]. Apart from descriptive investigations, we tried to focus on the logically disputable issue of high-dose prednisolone regimen, which is routinely practiced by majority of thyroidologists and currently discussed in most medical text books [6,7]. We believe that, treatment of an absolutely predictable and typically self-limited disease with large doses of prednisolane, looks exactly like shooting a tree sparrow with a 106 mm cannonball. We were, also interested to examine the likelihood of more disease rebound after withdrawal of high-dose regime compared to lower doses of the medication in management of SAT; a phenomenon that might cause more relapses. Considering the naturally long course of SAT, which is at least 3 to 5 months, using NSAIDs as the first line therapy, does not sound reasonable at all. Therefore, the starting dose of corticosteroid, as the first and foremost available medication, and the tapering protocol were considered to be thoroughly investigated. As a prospective study with rather rigid inclusion criteria and regular follow-up visits for a year, our study could be considered as one of the basic works in this field. With respect to the main purpose of the study, we, clearly, observed that even much smaller doses of prednisolone, and fairly rapid tapering of the medication might be considered as an efficient management protocol for SAT.

Out of 45 patients, only one case (2.2%) prompted us to escalate the prednisolone dose to 30 mg day. Quite predictable, only two patients (4.4%) demonstrated noticeable relapse, which is the lowest relapse rate reported so far [3-10]. In a recently published paper by Krishna et al. low-dose prednisolone resulted in obviously lower relapse rate (8%) as well [8], whereas, with the Volpe's advocated dose of 40-60 mg per day and more gradual tapering program, the relapse rate recorded to be as high as 20% [3]. Endorsing the results of Krishna [8] and Kubata [9], concerning the effectiveness of low dose prednisolone in optimal management of SAT, we would also suggest that applying the subordinate doses of corticosteroids might result in rather lower relapses, possibly due to dampening the well-known steroid withdrawal rebound phenomenon [11]. Considering the glucocorticoid medications as definitely double-edged swords, we shall remain tracking the major medical text books to see whether their respectable contributors would, eventually, consider this properly evaluated issue.

We declare that we have no conflict of interest.

No grant was received for this research work. We would like to thank the Islamic Azad University of Shahrood authorities for their administrative support.