A Simple Method for the Decapsulation of Dormant Resting Eggs for Nuclear Staining in the Monogonont Rotifer, Brachionus plicatilis Muller

Copyright: © 2015 Chhabra A. This is an open-access article distributed under the terms of the Creative Commons Attribution License, which permits unrestricted use, distribution, and reproduction in any medium, provided the original author and source are credited.

The bdelloid rotifer Brachionus plicatilis Müller is an aquatic invertebrate that predominately populates freshwater lakes and ponds. It is a pseudocoelomate which consists of approximately 1000 cells. B. plicatilis exhibits both asexual reproduction in which parthenogenetically derived eggs quickly mature into new progeny (~12 hours) or sexual reproduction in which fertilized eggs diapause for 2-3 months before reinitiating progression into organismic development based on environmental cues, such as water conditions and sunlight. Because B. plicatilis shares many of the conserved genes responsible for dormancy survival such as genes that code for late embryogenesis abundant (LEA), trehalose metabolism and small heat shock proteins (sHSP), it has become an excellent model organism for studies investigating dormancy and developmental biology. Several recent reports have developed procedures in quiescent B. plicatilis resting eggs for molecular manipulation of gene transcription, such as RNAi. However, the dechorionation procedure employed for those previous studies was not effective in our hands to penetrate dessicated resting eggs for nuclei staining. Therefore, we developed a procedure described in this manuscript for decapsulating encysted resting eggs for staining with Hoechst dye. This method may ultimately be used to track phenotypic aspects of entry into and exit from dormancy by determining whether there is a correlation in nuclei number and developmental progress in the Monogonont Rotifer, Brachionus plicatilis Müller.

The Rotifera phylum consist of approximately 2000 species of relatively small, pseudocoelomate, aquatic invertebrate that predominately populate freshwater lakes and ponds, and can contribute up to 30% of the total plankton biomass [1]. Brachionus plicatilis Müller (Rotifera, Monogononta) can serve as interesting model organism for studying the developmental biology in nonsegmented animals [2] owing to a short developmental cycle of ~20 hours [3]. In addition, B. plicatilis can be used to study the mechanism for primordial germ cells (PGCs) differentiation sharing conserved germ-line markers such as vasa and nanos [4]. Although Bdelloid rotifers can enter dormancy, by either whole body dessication or the formation of long-term surviving eggs; the monogonont rotifers enter dormancy during the egg stage either as the product of asexual parthenogenesis or by producing encysted diapausing resting egg (RE) formed from a fertilized ova [5].

Initial screening of expressed sequence tags (EST) of B. plicatilis cultures in differing stages of development revealed the presence of genes associated with protection against reactive oxygen species (ROS), chaperone proteins (heat shock proteins), late embryogenesis abundant (LEA) proteins, trehalose metabolism, aquaporins and others in resting eggs [6]. Real time RT-PCR showed that LEA proteins and small heat shock proteins (sHSP) were upregulated in both resting eggs and females producing resting eggs in comparison to amictic eggs and females producing amictic eggs, respectively [6]. High-throughput Illumina sequencing data in concurrence to RT-PCR analysis showed higher expression of LEAs, glutathione-S-trasnferases, HSPs, and downregulation in trehalose metabolism, aquaporins transcription during early RE dormancy and the respective expression pattern for the aforementioned genes in females carrying REs versus amictic correlated with the types of eggs they produced [7]. Highthroughput Illumina sequencing was also used to show that for resting eggs, genes associated with cellular maintenance and survival were upregulated such as antioxidants, oxidoreductases, and protein chaperone genes; in comparison to amictic eggs, genes associated with cellular and organismic development such as cell cycle and cytoskeletal genes [8]. Differential transcription and expression for respective class 3 LEA genes and proteins have been shown to be temporary regulated during RE development [9]. The quizzical nature of LEA proteins may be explained by protein modeling algorithms that predict that native unfolded structure of LEA is transformed into folded proteins during desiccation to function in nuclear stabilization such as in DNA binding and cytosekeletal substitution [10].

Transmission electron microscopy (TEM) has identified several organelles including nuclei, mitochondria, and free ribosomes, in both the ectoderm and inner mass in resting eggs (RE) of Brachionus suspended in diapuase [11]. The nuclei of the ectodermal region lack nucleoli and have scattered mass of heterochromatin; whereas, the nuclei of the inner region contain nucleoli and condensed masses of chromatin [11]. In experiments by Hagiwara et al. [12], to determine hatching of B. plicatilis resting eggs in response to irradiation and other stimulants (e.x. hydrogen peroxide), noted that number of nuclei in resting eggs on day one after formation to day 6 increased from 22-39. The nuclei number for resting eggs in Brachionus plicatilis has been recorded to vary in the range between 26-160 [13]. Snell et al. [14] described a method for the decapsulation of rotifers for siRNA treatment, however this method was insufficient for the proper labeling by Hoechst staining of developing rotifers in our hands (data not shown). For this report, we describe a method to decapsulate encysted resting eggs for nuclei staining, which may ultimately be used in the determination of nuclei number in the development of resting eggs.

Maintenance of rotifers and specimen collection

B. plicatilis cultures were initiated at approximate density of 6 rotifers per 1 ml of 40 parts per thousand (ppt) sea water for a total volume of 500 ml in a 1 liter Erlenmeyer flask (~3,000 rotifers). The cultures were fed daily with 500 μl algae (~9 × 1011) and were grown logarithmically for 4-5 days at 25oC to achieve densities of between 40-50 rotifers per ml. B. plicatilis cultures were renewed every 7-10 days. Naïve young females were collected into round-bottom 96 well plates and were examined hourly for the presence of newly developed eggs. The timing for the bearing of new amicitic (AM) or resting eggs (RE) was recorded and 10-20 samples were separated and collected based on differing time points (Example: 6, 12, 18 hours after the eggs were visible outside the mother). The eggs were immediately transferred and stored at -80oC until they were used for staining experiments.

For the samples that were decapsulated before subjected to staining, decapsulation was performed by the following procedure: Each set of resting eggs (10-20 eggs) was suspended in 400 μl in 40 ppt, 300 μl 40 ppt pH10, and 300 μl fresh 11% hypochlorite and vortexed for 4s (setting 7). Each solution containing REs was incubated for 3 minutes on ice. Next, the contents of the RE-containing solution was transferred into 5 ml 40 ppt and transferred into a 33 ml sieve. The sieve was washed with 5 ml of a 0.1% thiosulfate solution and the eggs were washed with PBS.

A Leica Wide Field Microscope (Leica Model DMi8 inverted microscope) was used to take images of rotifer amictic and resting eggs collected at varying time point stained with Hoechst dye. After the images were captured, deconvulation software (Leica LASX software) was used to analyze the images and measure the number, size and intensity of observed nuclei.

Maintenance of rotifers and specimen collection

B. plicatilis rotifers were continuously propagated under lab conditions in a simple salt solution fed with algae. For amictic eggs (Figure 1A-1C) and REs that were stained before the crucial 12 hour period (Figure 1D-1F), decapsulation was unnecessary. Both samples in Figure 1 were collected at 6 hours after the eggs were extruded from the mother. For the AM at 6 hours about 100 nuclei are observed as compared to the 50 observed in resting egg of 6 hours. After the 12 hour period, REs were decapsulated to observe and count the nuclei number (Figure 2). For REs collected at 12 hours (Figure 2A to 2F), about 50 nuclei are observed, as compared to the ~400 observed at the 18 hour period (Figure 2G and 2H). For this report, we optimized a decapsulation procedure in terms of hypochlorite strength, and bleaching duration for the nuclei labeling of encysted B. plicatilis resting eggs. During the decapsulation procedure, roughly 50% of the eggs are unusable for staining because of either overbleaching which can destroy the integrity of the egg, or under bleaching (Figure 2A and 2B) which does not allow for the Hoechst stain to penetrate the egg shell. 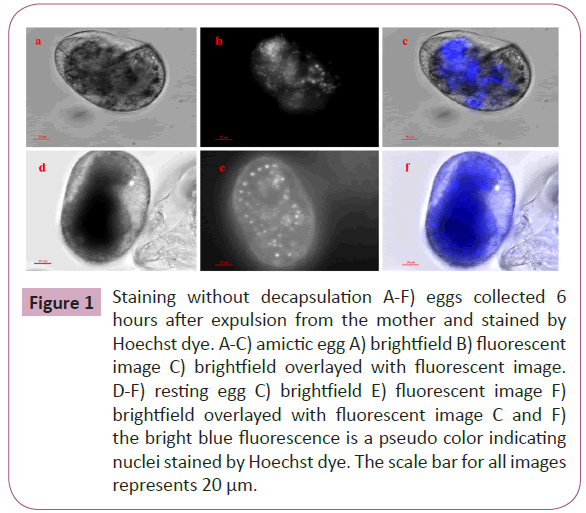 Dormancy is a phenomenon that encompasses a period of suspended metabolism and arrested development by intracellular and intranuclear factors [15]. Desiccation tolerance involves a serious of coordinated events involving late embryogenesis abundant (LEA) and heat shock proteins (HSPs) that are activated during water loss to prevent the drying out of cells [16-18]. In plants, pollen and seeds, survive desiccation by recruiting soluble non-reducing carbohydrate and LEAs to form intracellular glass that slow down intracellular trafficking and stabilize macromolecules [19]. Due to the unstructured conformation of LEA proteins, the classical role for these proteins is believed to function as a hydration buffer or in water substitution [20,10]. LEA proteins undergo conformational changes during anyhdyrobiotic and heat stress conditions that may function in cellular stabilization. The mitochondrial localization of a LEA has been reported in the brine shrimp, Artemia franciscana where it is expected to serve in a bioprotective role during anyhydrobiosis [21].

Genes for the trehalose biosynthetic pathway, which produces a product that is accumulated during temperature or osmotic stress, are ubiquitously found across the three forms of life and in kingdoms that include fungi, plants and animals [22]. Trehalose is a carbohydrate that is ubiquitously synthesized in a variety of lower and higher organisms to serve in a bioprotective role for protein degradation during oxidative stress and/or dehydration [23]. Trehalose has a role in water replacement during in both anyhdrobiotic and vitrificatic states associated with dormancy [24]. LEAs from Artemia franciscana have been shown to protect function in enzymes during desiccation and to work synergistically with trehalose to provide better protection than either agent acting in singular [25]. In addition, several small heat shock proteins, such as (sHSP) p26 and ArHsp22 have been has identified to localize to the cytoplasm and nucleus in Artemia and are thought to provide protection against irreversible stress incduced protein denaturation during encystment and diapause [15,26,27].

From the two possible modes of dsRNA uptake for rotifers that include injestion via feeding of young rotifers or during rehydration of dried resting eggs, initial trials showed higher intake by the former method [28]. Conjugated dsRNA to lipofectant have shown varying degrees of gene knockdown and phenotypic changes targeting genes for reproduction and lectin-binding in the rotifer Brachionus manjavacas [14,29]. For example, a gene that is involved in eye formation in higher organisms termed Pax6 was knocked-down by feeding rotifers E. coli exoressing dsRNA [30]. However, Snell et al. [14] showed that the RNAi pathway can also be activated by the addition of dsRNA to decapsulated rotifer resting eggs. In our hands, the suggested protocol of using 6% hypochlorite for 1 minute at room temperature did not dechorinate the eggs sufficiently for staining with Hoechst dye. In our modified procedure, we dechorionated the resting eggs by bleaching with 11% hypochlorite for 3 minutes on ice and rapidly washing out the bleach with sea water and neutralizing the hypochlorite with thiosulfate. For this method, approximately 50% of the eggs were properly decapsulated to allow for staining with Hoechst dye (Figure 2). As compared to amictic eggs, the division of nuclei occurs slower for the first 12 hours in resting eggs (data not shown).

Rotifers can serve as interesting model to study dormancy and developmental biology. In addition, the bdelloid rotifer (Macrotrachela quadricornifera) was proposed to be used in space experiments aboard the international space station (ISS) for understanding the role of cytoskeletal organization in the establishment of the division furrow and role in the embryonic developmental stages, including oogenesis in hypogravity conditions [31,32] and can be an effective agent in bioremediation [33]. Previous reports have shown that B. plicatilis is amenable to genetic manipulation by the RNAi pathway [28]. However, the methodology used to insert dsRNA into encysted resting eggs was not efficient in our hands to penetrate the REs for nuclei staining with Hoechst dye. Therefore, we adapted the Snell et al. protocol for decapsulation of REs to allow for proper staining of nuclei to determine nuclear progression during the development of fertilized resting eggs in Brachionus plicatilis Müller.